Why some people never get ahead 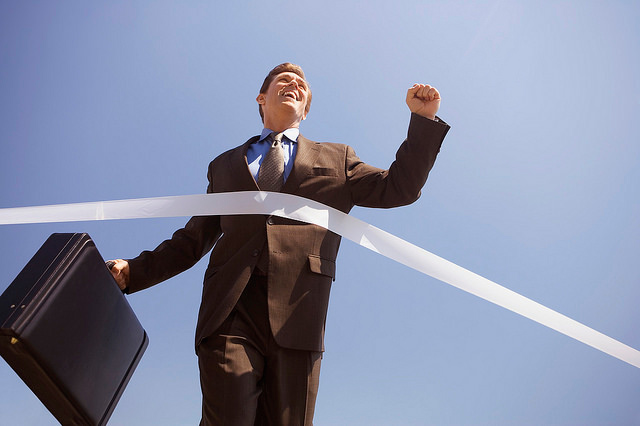 Businessman crossing the finish line by Meridican of Flickr

I found an excerpt this week that I wanted to share because I so often run into hesitancy among job seekers to portray their value at the level that is necessary to inspire their network to make powerful introductions and entice employers to make optimal job offers.

While I certainly relate to the inclination to be meek and humble (a Catholic school lesson I took way too literally when I was bullied and teased), the cost is often too high. Not only does the job seeker suffer, but so do employers who really need what they have to offer. People who offer tremendous value deserve really great jobs. The whole economy suffers when people who perform their job well fail to connect with companies, and when companies are challenged in identifying great talent mostly because they only see who is in their direct line of vision.

The book is called Secrets of the Millionaire Mind by T. Harv Eker. I have posted before about his Millionaire Mindset Intensive, which I recommend (go to www.MMIgift.com and enter the Ambassador 2.0 code MMI39526 to get a FREE ticket!). Most people there had already read this book, but I am doing so now. What T. Harv Eker aims to do with his book and the MMI is to help you diagnose the thinking patterns that keep you from realizing your financial potential and direct you in rewriting your patterns to support your success, thereby resetting your financial “thermostat.”

The excerpt below may help those job seekers and careerists who experience discomfort around self-promotion understand the source, which may consequently unlock them from the limits that these emotions put on their career growth and salaries.

“Resenting promotion is one of the greatest obstacles to success. People who have issues with selling and promotion are usually broke.

‘People have a problem with promotion or sales for several reasons. Chances are you might recognize one or more of the following.

‘First, you may have had a bad experience in the past with people promoting to you inappropriately. Maybe you perceived they were doing the ‘hard’ sell on you. Maybe they were bothering you at an inopportune time. Maybe they wouldn’t take no for an answer. In any case, it’s important to recognize that this experience is in the past and that holding on to it may not be serving you today.

‘Second, you may have had a disempowering experience when you tried to sell something to someone and that person totally rejected you. In this instance, your distaste for promotion is merely a projection of your own fear of failure and rejection. Again, realize the past does not necessarily equal the future.

‘Third, your issue might come from past parental programming. Many of us were told that it’s impolite to ‘toot your own horn.’ Well, that’s great if you make a living a Miss Manners. But in the real world, when it comes to business and money, if you don’t toot your horn, I guarantee nobody will.  Rich people are willing to extol their virtues and value to anyone who will listen and hopefully do business with them as well.

‘Finally, some people feel that promotion is beneath them. I call this the high-and-mighty syndrome, otherwise knows as the ‘Aren’t I so special?’ attitude. The feeling in this case is that if people want what you have, they should somehow find and come to you. People who have this belief are either broke or soon will be, that’s for sure. They can hope that everyone’s going to scour the land searching for them, but the truth is that the marketplace is crowded with products and services, and even though theirs may be the best, no one will ever know that because they’re too snooty to tell anyone.

‘You’re probably familiar with the saying “Build a better mousetrap and the world will beat a path to your door.” Well, that’s only true if you add five words: ‘if they know about it.’

‘Rich people are almost always excellent promoters. They can and are willing to promote their products, their services, and their ideas with passion and enthusiasm. What’s more, they’re skilled at packaging their value in a way that’s extremely attractive. If you think there’s something wrong with that, then let’s ban makeup for women, and while we’re at it, we might as well get rid of suits for men. All that is nothing more than ‘packaging.’

‘Rich people are usually leaders, and all great leaders are great promoters. To be a leader, you must inherently have followers and supporters, which means that you have to be adept at selling, inspiring and motivating people to buy into your vision.”

2 thoughts on “Why some people never get ahead”