Posted on September 18, 2017 by Karen Huller in Being, Self-driving life | Leave a comment

Part 5 in the MindValley Reunion=Mind Blown series, which continues next week 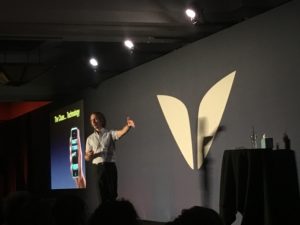 Remember when a hand-sized computer was a thing of science fiction? Technology is evolving exponentially, and while we have glimpses right now of technologies that could radically alter our lives, our work, and our communities, such as self-driving cars, we have just as many reasons to want things the way they were – simpler.

At the MindValley Reunion last month in San Diego, Jeffrey Allen, a former Department of Energy Engineer turned Energy Healer, pointed out an eye-opening parallel between self-driving cars and self-driving lives. What this means, is that we are shifting from a paradigm of “doing” to “being.”

In other words, right now you have to drive – get in your car, start it up, keep your foot on the gas, break, steer, and stay completely alert to avoid mistakes of other drivers and avoid making mistakes yourself. Otherwise, BOOM – you crash. This is a high-stakes activity, and stress increases when you have to make decisions with minimal information. But if you didn’t have to do that, then you could read, watch a movie, take a guitar lesson, eat and drink, and a myriad of other things.

In a self-driving life, you don’t have to strive. You don’t have to punch a time card, commute, labor, attend meetings, spend hours in front of your computer, clean, or make any other effort unless you want to, unless you are inspired to. You do as you are inspired to do. The rest is just a focus on your being – your mindset, your heartset, and your bodyset – How you are being.

A lot of Americans supported Trump for his promises to revive the coal mining industry and domestic manufacturing, to save jobs, and get depressed economies back to work. If your career has been impacted by the shift to newer technologies, then this seemed like salvation.

If you were raised to believe your value is in what you do, then this shift is probably more than a little unsettling, and it probably seems wrong and against everything you have been taught. Plus, you are justified in feeling very much like your skills have been considered obsolete, and that creates a deep need to defend your skills and your value, and fight the shift any way you know how.

There is an innate resistance to change and that is all thanks to our brain. That doesn’t mean we can’t eventually reach a place of enthusiastic adoption, especially if the changes mean an easier life.

Does the following statement make you feel relieved, angry, or confused?

You do not have to be, do, or have anything in order to be valued or loved as a person.

Your vocation is not your value.

Even if you are against the idea of allowing people to just be rather than having to hustle, I want you to imagine right now what YOUR life would be like if you could do less, strive less, and have all of your needs fulfilled?

BE in that feeling.

Right now your logical brain may find this hard to conceive, let alone believe. How could this be?

Every day new awareness is pulling us toward a collective, undeniable truth, and as we evolve as open-minded, open-hearted, open-spirited receptacles of new awareness and intuition, we gain wisdom as to which actions will be the most meaningful, impactful, and productive. That is what creates greater ease AND time.

But in the meantime, we face conflict. Those who want things to stay as they are and those who are further along in accepting and adopting the change are pulling and pushing. We will all weave in and out of four different stages (below) of living between resistance and allowing, and can even be all of them simultaneously:

B – Still doing for material living, but decisions are more influenced by pulling of the heart and soul

C – More fully heart-driven, but at risk of self-righteousness that leads to inability to accept people in A and B

D – Balanced between spirit and mind.

Eventually Jeffrey Allen sees everyone moving into greater awareness. In fact, he documents evidence as being the simultaneous increasing rate of vibration that both the universe and us humans, and it’s accelerating rapidly. In the 1970s the universe was vibrating at 7.83 Hz. Then in 2014 it was measured at 24 Hz, and in 2017 it was measured at 40 Hz.

The risk of resistance Allen refers to as the X-zone – where the conflict leads to self-annihilation and we destroy the planet and the human race beyond repair. We have to look out for attachments, the need to play small and safe, needing control, which will keep us in the slow lane, and needing to be right and judging others. Judging others, he says, is a sign of progress, as long as we eventually let it go.

Jeffrey Allen depicts a world where if you turn inward first to be aware and present, you can then intuit what action and energy you send outward. This is what creates your self-driving life.

If this sounds crazy to you, I challenge you to disprove it.

If this sounds delightful to you, I challenge you to prove it.

Try letting go for a week. Surrender to doing what brings you joy before you get to your actions. Let go of what happens and expectations of rewards. Try trusting that there are forces conspiring in your favor, and let them do their magic. Whatever goes wrong, if anything, during this time, can be repaired if it’s meant to be.

I would love to hear the results of this experiment.