According to Science, Your Next Job Just Got 2 Degrees Closer 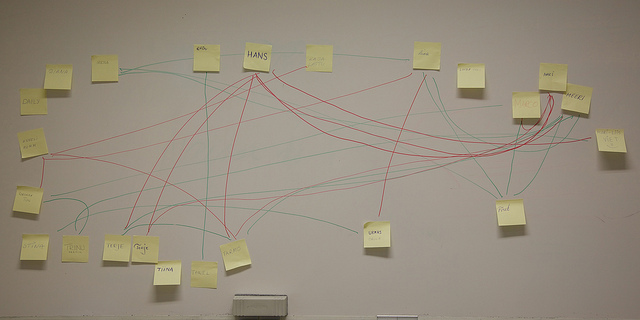 Social Network in a course by Hans Poldoja of Flickr

In 1961, Stanley Milgram, a psychologist determined that we are connected to anyone on earth by just six degrees by conducting several experiments to examine the average path length for the (non-virtual) social networks of people in the United States. The project was coined the “small-world experiment.” In the experiment, Milgram sent letters to 300 randomly selected people in Nebraska and Kansas to one target person, a stockbroker in Boston. The letters could not be directly sent to the target, but had to be sent through someone they knew on a first-name basis who might know the stockbroker. Only 30% of the letters reached their target, but the research discovered that there were about six people connecting each participant to the target. Think of the concept as meeting a stranger and discovering you have a friend in common. As of today, the world has gotten smaller by nearly 2.5 degrees. A smaller world means your dream boss is that much more accessible, and your next job is that much closer, IF you use your network to find your next job.

Later social experiments revealed that you are much more likely to land a job through random acquaintances than through your close friends. You and your close friends all know the same people and share the same information. However, it is through random acquaintances that you can connect with people very far from your social circles. This is the principle in which LinkedIn was founded. It is why the introduction request feature was invented and what makes LinkedIn such an effective job search tool.

The degrees of separation have become smaller

Neil deGrasse Tyson, an astrophysicist who has dedicated his career to improving America’s scientific literacy, stated that because of social networks like Facebook, separation is down to less than five degrees. In 2011 Facebook found that 92% of their users were just connected through five steps and the number has been decreasing.  According to the newest research released by Facebook in 2016, the degrees of separation are just 3.57. (This number only applies to active Facebook users which total about 1.59 billion people.)

We are all closely linked and four (or less) handshakes could connect us to anyone on the planet. Hence why networking is the number one activity to dedicate yourself to when you want to accomplish something, especially job searching. We have constantly repeated T. Harv Eker’s famous quote: “Your net worth is your network.” We believe Eker’s words are worth repeating, because while he is talking about opportunity in general, networking has proven time and time again not just to be the best way to land a job, but to land the job you want.

Your next job is closer than you think

A connection at the employers you want to work for may be only a few degrees of separation away through a social network such as Facebook. In fact, it is possible to use Facebook and Twitter to quickly land your next job. Think about it: If you can potentially meet anyone on the planet through fewer than 3.6 degrees of separation, it is possible to make the connections that will help you land faster. These facts are kind of mind-blowing– the world’s population has increased by hundreds of millions, but the world has gotten almost 50% smaller thanks to technology!

Your connections consist of family, friends, acquaintances, friends of friends, and even strangers where you may have a common interest. They are your network and by tapping into those existing relationships and nurturing them, your network will grow– much like a garden. If you are building your network online, create a relationship with the people you wish to network with by engaging them. The ultimate goal is to move your conversation offline in order to establish a meaningful relationship. Through these relationships, the introductions that will lead you to a desirable job are made.

Take opportunities to build your network by networking in person at job events, industry groups, and even industry events. Go further faster by focusing on the QUALITY of your networks, as opposed to the quantity. Quality networks are built with the people with whom you share an interest. Interests consist of a hobby, a political view, a mission, or a value. We do not want to imply that if you simply shake enough hands (without a common interest), you will land a job. You could shake that many hands and eliminate that many opportunities with the wrong impression. Networking is really about adding value to others and enriching your own life. The benefits or detriments you derive from networking are a byproduct of your approach. Like a garden you nurture, you reap or harvest what you sow.

In the early 20th century various scientists proved that the world is small and that we are all connected by just a few degrees. In the 21st century, the world has gotten even smaller thanks to the massive explosion of communication technology. Instead of being connected by six degrees, we are connected by 3.6. Many people tend shy away from networking, but the employers you want to work for are just a few handshakes away. A mere 3.6 degrees are all that separate you from the job you have always wanted. By taking advantage of a rapidly shrinking world, you can expand your network, connect with anyone, and land your dream job.