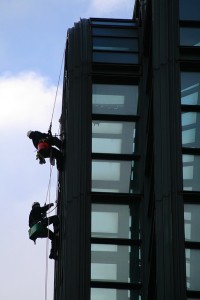 Creativity and passion are important in distinguishing yourself while searching for your career or making a transition, but some job seekers take theirs to epic levels. While many insist on stating in their résumés and profiles that they are creative, innovative, think out of the box, etc., there are some job search heroes out there proving it. I scoured the internet for the craziest ways professionals sought their dream jobs. Here are five of my favorite stories.

1. Using an employer’s platform to showcase yourself.

Mike Freeman wanted a job as a Business Analyst at Shopify. Instead of sending the usual résumé that hundreds, if not thousands, of applicants use, he bucked the system and made himself a spectacle, a very creative and attractive spectacle. Freeman set up a store using Shopify’s own platform and used it to showcase himself. A bold and dazzling display on the storefront read “So I’ve noticed that Mike Freeman doesn’t work for you guys yet. Let’s fix that.” The clever job seeker went even further. Going beyond just listing his résumé, Freeman even gave employers the chance to book a meeting with him in-person. Fortunately, his boldness bred success and Freeman landed a marketing position at Shopify.

In 2011 Kimberly Ashdown was determined to work for Ashton Kutcher’s media company, Katalyst, as an intern. There was only one problem – she wasn’t currently a college student. The Creative Production Coordinator didn’t let a few minor details stop her. Ashdown launched several websites including iwannaworkatkatalyst.com, internuptopia.com and kimberlyashdown.wix.com in order to land her dream job as a Katalyst intern. Her efforts were rewarded, and she worked briefly for Kutcher before returning to her career as a Production Coordinator.

3. Infographics can be spectacular résumés.

Chris Spurlock was a senior journalist student at the University of Missouri in 2011. He showcased his ability to create infographics by creating a résumé with visual flair. The result was a spectacular infographic. Spurlock took his work a step further by posting his résumé to Huffington Post. It wasn’t long before the article went viral and garnered hundreds of tweets, thousands of likes on Facebook, and tens of thousands of views at Huffington Post. The popularity of the infographic résumé persuaded Traffic and Trends editor Craig Kanalley to hire Spurlock as the news organization’s Infographic Design Editor. Spurlock isn’t the first person to obtain his dream job by taking a visual route with his résumé. In 2010 a few other creative job seekers saw success by using infographic résumés, and I’m somewhat surprised the practice isn’t used more often. At Epic Careering we promote infographic one-page profiles as a very effective way to generate high-quality employment leads. Images are so much more memorable than text.

Max Crowley was a Systems Integration Consultant for Accenture when he wanted a change of pace in his professional life. Namely, he had his heart set on working for Uber, a relatively new startup company introduced in 2009. His previous role and company weren’t an obvious match for Uber, but he devised a strategy to overcome that challenge. When Crowley learned Uber would be launching in Chicago, he positioned himself to be hired. His endeavors included following Ryan Graves, Head of Operations, on Twitter, sending him e-mails, and showing up at recruiting events Graves attended. Crowley’s passionate determination paid off and he got the job as Uber’s Senior Community Manager. While this approach can produce favorable results, you must take care not to blur the line between pursuing a potential employer and being creepy. In my 2013 article, “Can this strange campaign advice land you work?,” I highlight the risks of digging too deeply into a decision-maker’s background.

5. Advertising yourself on Google’s AdWords.

Alec Brownstein was a Copywriter. His professional life at a large ad firm was not what he wanted. He wanted to work for genuinely innovative Creative Directors. Brownstein was also a fan of Googling the very Creative Directors for whom he dreamed of working. One day, the copywriter was hit by a stroke of genius. He noticed his favorite Creative Directors didn’t have sponsored links attached to their names. Using Google AdWords, Brownstein purchased the top advertising spots for the directors’ names and used the space to advertise himself. He figured the directors, like everyone else, Googled themselves and they would eventually see the sponsored ad. The effort literally cost him $6 and paid off a few months later when he was contacted by almost all of the Creative Directors he targeted. It wasn’t long before Brownstein was hired as a Senior Copywriter at Young & Rubicam (Y&R) New York.

When you look at how most people look for a job, it isn’t hard to stand out from the rest of the crowd. Focus on doing a few things well instead rather than reaching for a particular volume of activity. Volume does not equal desirable results; it’s not necessarily a numbers game! Work smart rather than hard. Creativity and passion can go a very long way in your career. We live in a world where all things are possible. Be bold. If these professionals can think outside of the box to land their dream jobs, so can you.

1 thought on “5 of the Craziest Ways People Found Jobs”