Ahh. The end of the world as we know it. 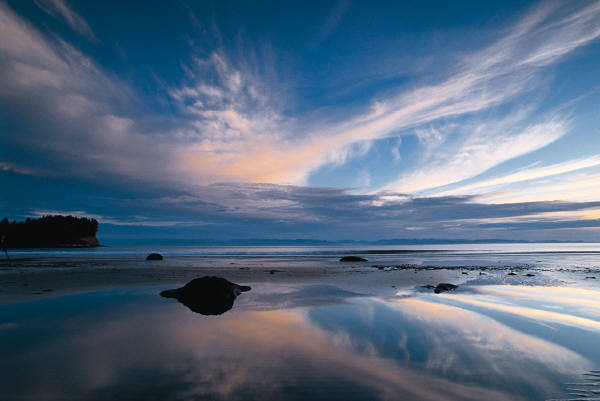 Over the past few years I have been doing some “light” reading on quantum physics in my “spare time.” I say it was light reading sarcastically; the content was so technical that I often had to re-read the same sentence several times to absorb its meaning. It was my “spare time” because I could rarely capture moments of silence to focus on these incredibly mind-flipping concepts. It took me a whole year to read one book (The Field by Lynn McTaggart.) It was substantiation that I needed, however.

When I first started Charésumé, The Secret was making its rounds in some of the circles in which I was networking. I didn’t read The Secret, but I did watch the video. I wanted to believe in the Law of Attraction (that which we focus on, we attract) because it meant that I had the power to create my circumstances and that I could create circumstances that led to success. At the same time, I didn’t want to believe in the Law of Attraction because it meant that my current circumstances, which were not very conducive to the success that I sought, were my creation as well. In the end, I wasn’t going to believe anything that had little scientific basis, so the books I read chronicled the progress of quantum physics studies and their implications on the universe and its laws. I found that some of the concepts in The Secret were supported by science.

So while I did have to confront that some of the unfavorable conditions in my life were my own doing, I also had to be proud of what I had accomplished knowing that it was more than luck. And, if I could figure out how to continually recreate the conditions that led to my successes, I might just reach all of my goals. I thought to myself, if I can just train myself to calibrate my energy, how easy it would be to make the impact and contribution that I’m driven to make with all of the collaboration and resources of an abundant universe.

In the past couple years I had been gaining a new understanding of reality while hype around the end of the Mayan calendar, prophesies of Nostradamus, and Harold Camping’s rapture predictions continued to build. It led me to wonder – if there was an end coming, maybe it was the end of thinking of ourselves as separate physical entities and the beginning of worldwide acceptance of our true energy nature. Furthermore, if the whole world understands the implications of their energy, then we can intentionally and naturally align ourselves with like-minded individuals who will give and receive generously to make things happen.

If this were the worldwide approach to success, everyone would approach careers from a starting point of passion and contribution. Adopting this paradigm requires that you have faith that the universe will furnish for you what you desire and what you need to fulfill on your missions, not just what you need to live.

The more I immerse myself in this new (to me) idea of reality, the more I meet people who have studied the same. Some of them have invested tens of thousands of dollars on their education, and they are realizing amazing results in their lives and careers. The old me might have met these people and believed that I was not on the same level, that I was unworthy of the kind of success that they have achieved, or that this level of success was for other people, not for me. Now, however, my recent breakthrough has allowed me to receive these people as kindred mentors and see myself as someone who can add value to them as well. Already (since mid-December) I have been approached for 2 jobs (I am not looking), was introduced to a powerful potential speaking partner, inspired 3 great talents to join my Board of Advisors for my mobile app, and managed to save money for the first time since I had kids. I’m learning new investment strategies and preparing the infrastructure of my life to support wealth, in anticipation of great wealth. I am asking new questions and getting new answers.

This is not the start of my journey, but I know it is a turning point. I am so grateful that you are reading this and that you are experiencing my journey with me. I would love to hear about your journeys. I hope you know me as someone who would jump at the chance to be of assistance to you. If I have wisdom, resources, or connections that will move you forward in an authentic direction, I am happy to offer it. I believe that this moment in time could be the end of the world as we know it, and what a wonderful world it could be if we change our approach to intention, vocation and collaboration.

Picture it. What would you give, do, have if you knew that money would always be there?

Need a financial breakthrough? Get thee to the MMI!

As much as I complain about the amount of incoming e-mail, junk and relevant, some times I come across complete gems.  I received, by way of a marketing guru’s e-mail list, free tuition to a seminar that promised to reset my financial thermostat, which was a very intriguing concept. I had read books on the psychology of money (check out Crazy About Money, by Dr. Maggie Baker). A financial thermostat is a concept to explain why few people accumulate ridiculous wealth and, even if they lose it (eh-huh, Trump), can easily rebuild it while most others struggle to break through income barriers. It also explains why some lottery winners lose their fortunes.  Upon viewing the video, I made a reservation. Then I had to figure out how I was going to get there – who was going to watch my kids, since it was my husband’s crazy-busy work season and swim season, where I was going to stay in Baltimore (the closest and easiest location), and even how I was going to pay for the trip, since it was Christmas–time.  It’s funny how once you decide to do something, some things just fall into place.  I had no problems figuring any of this out.

As easy as it was to make the weekend happen, I had no traffic getting down to Baltimore on a Friday afternoon, I arrived early at my hotel, had no problems checking in or parking, and found out that the convention center was just on the other side of the parking garage. Then I find an Ale House right across the street from the Convention Center (Pratt Street Ale House), AND they had a homebrewed New Zealand Black Ale. I digress…

I was just as eager and anxious to find out if and how this weekend-long financial freedom seminar was going to deliver as I was to leave my babies for my first weekend away.

1: an offensive thrust that penetrates and carries beyond a defensive line in warfare

2: an act or instance of breaking through an obstacle <a breakthrough agreement>

a : a sudden advance especially in knowledge or technique <a medical breakthrough>

b : a person’s first notable success <a breakthrough novel>

Though I do believe that financial freedom is everyone’s to achieve, I recognize that it takes a person of certain qualities to go out and get it. It takes open-mindedness, a sense of hope, self-worth, coachability, drive, and commitment. Of those qualities, coachability is the most critical, because with coachability, anyone can acquire the rest of the qualities, for they reside within all of us. In many of the personal and professional development workshops I have attended, I have seen closed minds open, hope restored where it was lost, unworthiness shattered, drive discovered and commitments made all because a coach had the keys to unlock a spirit that had shut down, perhaps even long ago. The MMI provided this for those present and participating.

Even though the “apocalypse” could have been approaching, no one there was counting on it. For a moment I wondered if the end of the world as we know it could really be a new beginning and, if everyone could attend a weekend like this, what a wonderful world it could be. I decided to write a couple of blogs on that very idea.

This blog, my first educational review blog as promised in my newsletter,  was much more important to do first, however, because there are a few MMIs coming up and if anyone reading this wants what the workshop has to offer, the time to sign up is NOW.  When my financial thermostat was turned way up, I immediately wanted everyone to experience financial breakthrough. I signed up as an Ambassador for the program and can offer you complimentary tuition (valued at $795!)

All you have to do is sign up and show up (and whatever planning that requires.)

I will look forward to hearing about your new financial future.